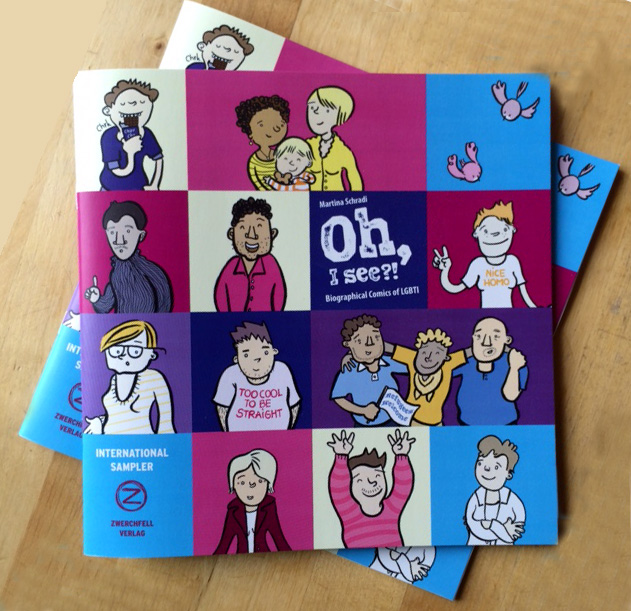 This book is about LGBTI: Lesbians, gays, bisexuals, trans, and intersex people who are still discriminated against all over the world, e.g. at school, at work, in health care systems, in churches, in public or private life.

Since discrimination is often a result of ignorance and invisibility, the aim of the book is to make the life of LGBTI more visible. The way of life, the self-concept, the identity but also experiences of discrimination of LGBTI are going to be more visible and understandable through biographical comic reports. For this purpose, Martina Schradi has been collecting stories of LGBTI by interviewing them and transforming the stories into short one to three-paged comic reports based on real life events and experiences.

The comic strips are funny, surprising, sad and sometimes sobering – and they all have one thing in common: They are thought-provoking,pointing out the barriers and absurdities people have to face in everyday life and living together with others when their sexual orientation or gender identity does not correspond with the mainstream.

Martina Schradi, was born and grew up in Nuremberg. Being a comicfan since she was little, she has been drawing since she was able to hold a pencil.

Nevertheless she dropped it for some years. After studying psychology in Erlangen and Amsterdam she worked as a psychologist and later picked up drawing again.

The comics have been published online at ohisee.org and in print as posters to be exhibited in various venues in Europe and North America fighting prejudice against LGBTI. Further translations into Russian, Spanish, Chinese are in progress and are also published online.

The original german publication, Ach, so ist das?!, was awarded the ICOM Independent Comic Award Jury‘s special award for an exceptional comic book publication in 2015. In 2016, it received a special mention as an Extraordinary Book by the International Festival of Literature, Berlin.